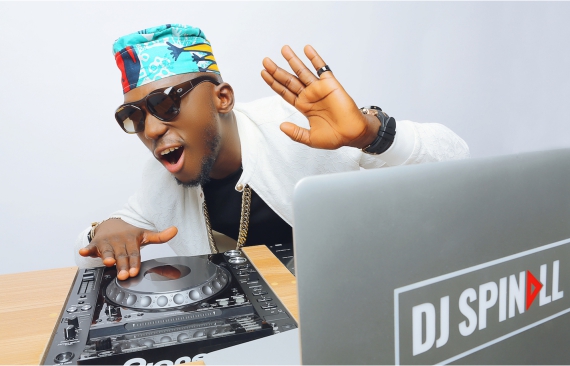 Sodamola Oluseye Desmond is a multiple award-winning DJ, record producer, song writer and one of Africa’s most successful & celebrated Disc Jockey. He is popularly known as DJ Spinall also known as Top Boy & TheCAP. He grew up in Lagos, born June 2nd as third child from a family of five. He started calling himself Spinall in 2003 which as the name implies signifies a DJ who plays all genre of music i.e. he is not restricted to any specific genre.

His style of play has been tagged by many as ‘fearless’ as a result of his ability to bring all kinds of music in one play list, a feat that has differentiated him from the rest and won him recognition and several awards.

Unlike many, DJ Spinall didn’t opt out from school to pursue his passion of becoming a DJ, but rather, after his B.Sc. in electrical and electronics engineering, he attended several DJ schools both at home and abroad where he perfected his craft.

DJ Spinall created a style edge to his outfit known as TheCAP, tracing his roots back to his culture. TheCAP, which fans tags as “TheCrazyAzzParty” has since then been his brand power and identity. Ever since then a lot of party lovers have been seen wearing similar Caps at event.

In 2014, DJ Spinall launched TheCAPMusic, a record label/management company. In the following year he signed Killertunes & Stunna as producers to the TheCAPMusic. The label has been the most sort after music production company in Nigeria. TheCAPMusic has produced some of the biggest hit songs in Africa including – Nowo – DJ Spinall, Yeba – Kiss Daniel, Manya – Mutay & Wizkid, Fake Love – Wizkid & Duncan mighty, Baba – DJ Spinall, Bobo – Davido & Mayorkun, Motigbana – Olamide just to mention a few.

In 2015, DJ Spinall became the first African DJ to be endorsed by any international brand. He is the official brand ambassador for Smirnoff. This contract has been renewed four times. On October 28th 2015, DJ Spinall released his debut album titled ‘My Story’ featuring some of the biggest names in African music including 2face Idibia, Mafikizolo, Burna Boy, M.I, Yemi Alade, Timaya, Ice Prince and many more. Including record-breaking hits like Gba Gbe e, Money, Pepe Dem, Excuse Me.

In the following year precisely on October 10th 2016, DJ Spinall released his sophomore album titled TEN. Industry veterans have described the album as one of the best albums of the year. DJ Spinall expressed his production skills by producing the most songs on the album. The TEN track album features Davido, Patoranking, Sauti Sol & Mr. Eazi among many others. The widely accepted album features hit singles like “Package” ft. Davido & “Ohema” ft. Mr. Eazi.

In 2018, DJ Spinall was announced as Pepsi DJ brand ambassador. He is currently featured on the new Pepsi world cup campaign ad. Also in 2018, DJ Spinall Toured 11 Cities In the United States of America, 3 Cities in South Africa. He headlined and sold out shows around the world including in Uganda, Marbella, Spain, Stockholm, Togo, Congo, Portugal, Ghana. He also performed in one of Canada’s biggest event Centre Rebels . This particular tour has been regarded as one of the most successful tour by any African artist.

DJ Spinall released his ”4th” studio album Iyanu featuring Wizkid, Davido, Burna Boy and many more, the album featured one of the biggest songs of 2018 – NOWO, the biggest and most viewed song by any DJ in Nigeria till date with heavy impact on Rihanna, Naomi Campbell, Karol G, Diddy and so on. It featured yet another smash hit Baba featuring Kiss Daniel. It made it to MTV’s Top 20 songs of 2018. He Signed an International Record Deal with Atlantic Records UK, first by any DJ in Nigeria also Signed a publishing Deal with Warner Chappell worldwide.

Coming off the success of his first release in 2019 -What do you see ft. Kojo Funds, Spinall came back with 2 smash Hit track, ‘Dis Love’ featuring Wizkid & Tiwa Savage – Africa’s finest, ‘EDI’, featuring popular Nigerian artist, Reminisce and 1 worldwide remix of Sean Paul’s When it comes to love. All 4 songs which received over 90,000,000 streams across platforms, was one of the biggest hits of the summer.

With a number of big singles, awards, and continuing to open up new grounds for DJs from the African continent, he has further pushed the boundary for what an African DJ can achieve, He recently just took his annual Lagos concert tagged “Party of Your Dreams” on the road making first stop in London. He serenaded his UK fans with an electrifying 5- hour performance at London’s famous nightlife hub – XOYO! This will be the first by any Nigerian DJ.

This Summer Spinall was the only Nigerian that performed at The Glastonbury Festival on the Silver Hayes stage to over 20,000 people. This was the first performance by a Nigerian DJ at Glastonbury, the largest greenfield festival in the world. He also performed at The Ends festival, a music and food festival in Croydon alongside Nas, Wizkid and Damian Marley across three days to over 15,000 music lovers this summer inside south London’s Lloyd Park.