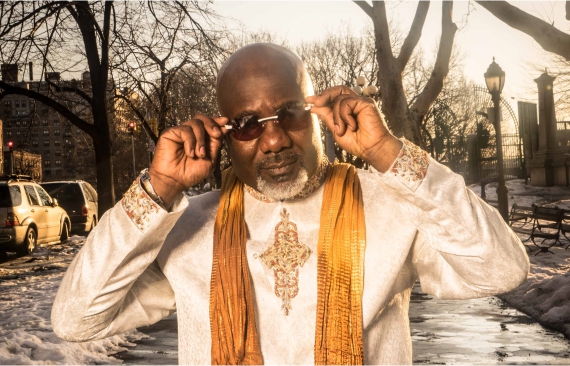 Kofo "The Wonderman" & The Daylight Stars are the most exciting Afro-Beat act on the market and are ready to take the world by storm. Led by talking drum master, Kofo "The Wonderman", the resulting music is a fiery cauldron of Afro-Beat sound that bridges Afro-Beat, JUJU and traditional music from Lagos, Nigeria with funk, soul and jazz. Kofo pays homage to the masters Fela and King Sunny Ade by carrying the music in a bold and daring new direction. This is especially evident on their brand new CD 'Message 102' produced by Femi Ojetunde. Writes Ayodapo Osinibi of Mulattapop Records about the new release

'Living in New York City and playing with musicians from a plethora of musical traditions and genres has brought out the musical explorer in Kofo Wonder.

His two previous releases were notable for their exciting fusion of Jazz, Gospel and R’nB mixed in with his heritage music. However, nobody could have predicted this new exploration into the the edgier side of Americana. We are talking here of the Southern/Roots Rock style of Lynyrd Skynyrd, The Eagles and The Allman Bros. And it does not end there. At the risk of raising the ire of music fans, critics and purists alike, he has given us his version of the Jimi Hendrix’s staple “Hey Joe”, while simultaneously channelling Johnny ‘Cougar’ Mellencamp.'

Kofo "The Wonderman" is a master talking-drummer, an innovator and singer/composer. He is a direct descendant of master musicians of traditional arts and cultures of the Yoruba people of Nigeria.

Since 2014 Kofo has been performing with David Byrne and the Atomic Bomb! Band playing the music of Nigerian funk musician William Onyeabor with appearances at New York's Summer Stage, BAM and touring the West Coast and Australia. Previously, as a member of Prisoners of Conscience, Kofo has toured and performed on the same bill with such pop luminaries as Tracy Chapman, Burning Spear and Jimmy Cliff. He has also appeared with his group (Prisioners of Conscience) as a guest artist on David Letterman's "The Late Night" show. Kofo earned his nickname "The Wonderman," because he is one of the world's foremost talking drum players. Hailing from a family whose roots are in percussion, Kofo has collaborated with such greats as Babatunde Olatunji and Little Steven of Bruce Springsteen fame. He was also one of the pivotal forces behind Majek Fashek's stellar "Sprit of Love" released by Interscope Records in 1991 and led a group of 12 talking drummers in a Performance at the Alice Tully Hall in Lincoln Center during the Spirit of the Drum Badanya '99.

Over the years Kofo has taken his mastery of the talking drum to new levels. He actually plays chords with his talking drum, can run an entire scale with his instrument and as a result has been renowned for his unique style and playing. As a band leader, Kofo is uniquely in tune with the rhythm and structure of his compositions. Rarely in African music does one find a percussionist fronting a group. The result is that there is a unique communication taking place between band members and the percussionist band leader.

Band leader Kofo explains: "If you were to see stars in the sky in broad daylight, you would be shocked, scared, intrigued and excited at once…The same variety of emotions that you will have when you witness our group, The Daylight Stars, perform."

The Daylight Stars, a band that has backed Kofo in this configuration for nearly a decade, have collectively worked with some of the biggest names in music business today including Sting, Chaka Khan, Harry Belafonte, Barbara Streisand, Richard Bona, Ziggy Marley and Angélique Kidjo to name a few.